Boundary Writing: An Exploration of Race, Culture, and Gender Binaries in Contemporary Australia 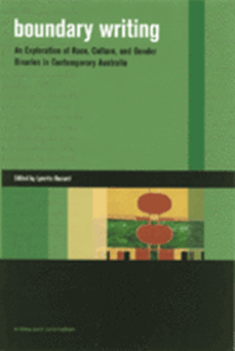 Have globalization and the emergence of virtual cultures reduced cultural diversity? Will the world become homogenized or Americanized? Boundary Writing sets out to demonstrate that this oversimplification denies the reality that today there is greater space for cultural diversity than ever before. It explores the desire to categorize individuals and collectivities into racial, ethnic, gender, and sexuality categories (black and white, men and women, gay and straight), which is a feature of most Western societies. More specifically, it analyzes the boundaries and edges of these categories and concepts.

Across nine chapters, contributors reveal that such binaries are often too restrictive. Through a series of case studies they consider how these various concepts overlap, coincide, and at times conflict.They investigate the tension between these classifications that in turn produce individual speaking positions. Many people – indigenous, native, Anglo-settler, recent migrants of diverse ethnic backgrounds, gay, transgender, queer – occupy an “in between” position that is strategically shifting with the social, political, and economic circumstances of the individual. In Boundary Writing, the reader will journey through various complex permutations of identity and in particular the ways in which indigeneity, race, sex, and gender interact and even counter-act one another.