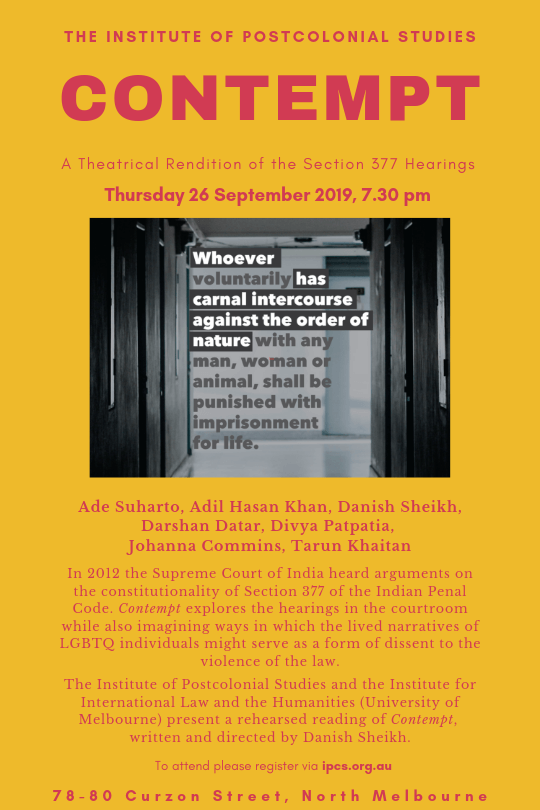 Contempt, A Theatrical Rendition of the Section 377 Hearings

Over a period of two months in 2012, the Supreme Court of India heard arguments on the constitutionality of Section 377 of the Indian Penal Code. The Court ultimately held that the law did not violate the Indian Constitution, leaving millions of queer persons vulnerable to state sanctioned persecution until a larger bench of the Court revisited the question 5 years later. Contempt explores the hearings in the courtroom in 2012, while also imagining ways in which the lived narratives of LGBTQ individuals might serve as a form of dissent to the violence of the law.

In September 2018 the Indian Supreme Court struck down the colonial era anti-sodomy law in the country, effectively decriminalising the intimate lives of millions of LGBTQ citizens in the country. The Institute of Postcolonial Studies and the University of Melbourne’s Institute for International Law and the Humanities mark a year of the decision with a rehearsed reading of Contempt, written and directed by Danish Sheikh.

The performance will be followed by a short discussion.

Join us, become a member of IPCS. 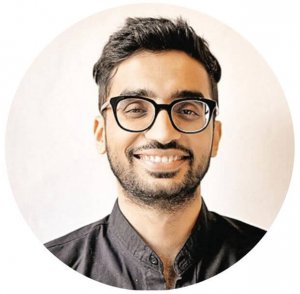 Danish Sheikh is a PhD Candidate at the Melbourne Law School, exploring the intersections of law and performance. Prior to this, he worked as a human rights lawyer and theatre practitioner in India. Contempt, his first original play was nominated for the Hindu Playwright Award in 2017 and opened the Global Queer Plays festival at the Arcola Theatre, London in March 2018. His writing has been cited by the Supreme Court of India in 2018, shortlisted for the Jan Michalski Award in 2017 and won the Publishing Next Award in the same year.